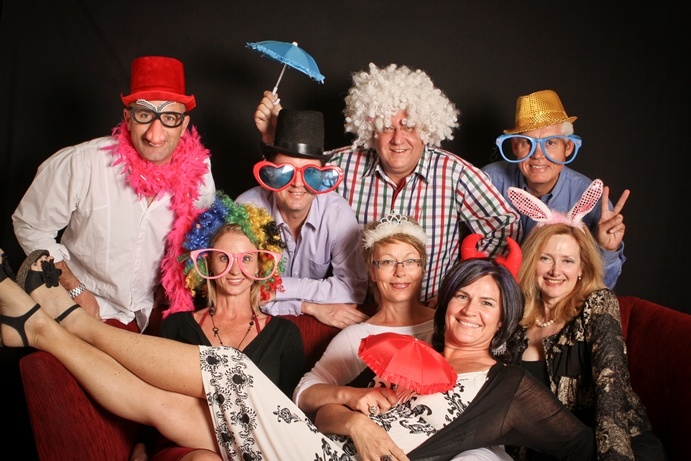 A social corporate event or function can be kick-started into a fun and memorable event if some Team Building Icebreakers are used at the beginning. It is natural for people to fall into their comfortable patterns when attending social events. This tends to manifest itself as people enter the venue and immediately seek out a familiar colleague. The result of this is that everyone groups up into their usual cliques and this hinders making new connections.
This maybe fine for a casual social event, but a corporate will derive greater benefit from hosting a function if their employees learn to make and improve on their existing work relations.
It is therefore expedient to act at the start of an event to set the mood and encourage inter-group interaction and communication. Obviously the attendees are there for a work social in this instance so too many Team Building props will look out of place.

Photo booth
A photo booth with a few costume props and accessories is a great way to get people excited and mingling. The people queuing interact with the ones trying on the costumes and those posing for the photos. Loads of fun is had, connections made and people see the fun side of their work mates. This can run throughout the duration on the function and prizes can be awarded to the participants for the best dressed the wackiest, etc.

Bid on a R100
A one hundred rand note is put on auction and the attendees are given the chance to bid on the note. The auction is a mock-up of a traditional auction and the note is actually awarded to the highest bidder.  Excitement builds and fun is had as the bids generally exceed the value of the note.

Common Interests
This activity helps people realise that they have plenty in common with their fellow co-workers.  The activity begins with the group gathered together and then they get divided up into smaller and smaller groups that have the same background, interests or similarities. For example married or single equals two large groups. From there more interesting questions can be asked of the groups, for example the married group divided into a subgroup married and camping enthusiasts.

Contraries
Each participant is allocated one of a contrary such as hot, the other being cold or light/dark wet/dry and so on. The individuals cannot see what they are as the word is stuck to their back. The individuals then have to mingle in the crowd and ask others yes and no questions to find out what they are. They then have to find their contrary in the group and learn a few interesting things from each other.